iPhone sales could reach record heights this Christmas, as Apple expects to sell between 75 and 80 million iPhones during the 2020 holiday season. The current holiday sales record is 78.3 million, set in 2016. Here’s how many iPhones Apple has sold during previous holiday seasons. 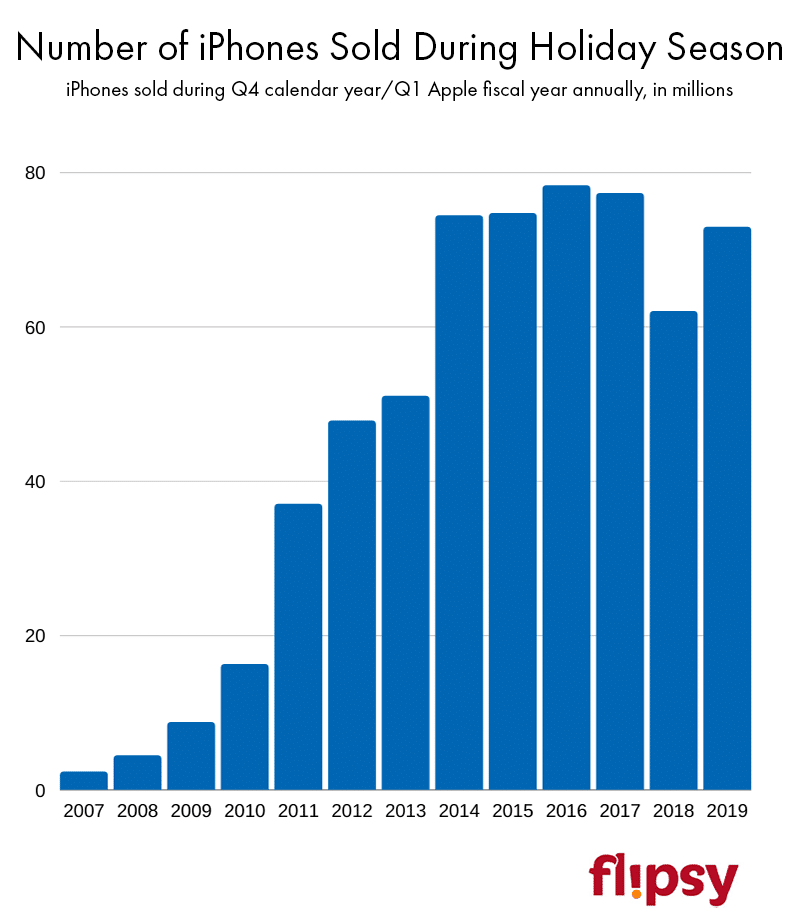 The anticipated uptick in 2020 iPhone holiday sales could be attributed to the four 5G compatible phones Apple unveiled earlier this year, similar to how other technology milestones influenced historical iPhone sales figures.

Undoubtedly, Apple has established the iPhone as one of the world’s most popular Christmas gifts. But with as many as 80 million units set to be sold this holiday season, what can people do with the old phones their new iPhones will replace?

Rather than stash them in junk drawers (where the average American stores $265 worth of unused gadgets) or contribute to the growing e-waste problem, they can quickly turn those old phones into cash with our free service at Flipsy.com.

We make it easy to get more money for old phones by instantly comparing buyback offers from 20+ trusted stores that compete to pay top dollar. We also show which stores offer price locks. Price locks let people lock in a high price for up to 30 days, keep their old phones until the new ones arrive, and beat the inevitable post-holiday value drops. Price locks are 100% free and there’s no obligation to sell. See how much your phone is worth and lock in a high price now at Flipsy.com.

> Neglected phones at high risk for low worth> The latest iPhone for two lattes a month?> Where to get the most for your phone> Where to sell your broken phone> Can you trade in a prepaid phone?

Tags: All, iPhones, Phones
Previous: MVNO Carriers Compared: Find the Best MVNO Plan for You
Next: How to Save $1,000 a Year with Cheap Family Phone Plans (Step-by-Step Guide)